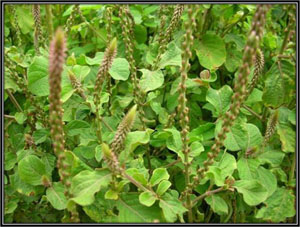 Achyranthes aspera is a botanical name of rough chaff, which is an erect and stiff annual herb which grows densely up to 50 cm in length.

The ash of this herb contains a high proportion of potash and is an antacid, which is an important constituent of alkaline medicine useful in relieving acidity.

This herb occurs in temperate and sub-tropical Himalayas from Kishtwar to Sikkim and Khasi hills at 1200-1820 metres. Also found in hills of Bihar, Konkan, Nilgiris and Travancore. The major used parts of this herb are seeds and dried plant. This herb is available with grocers as well as dealers of raw drugs throughout India.

It is worthwhile to mention that this herb has numerous branches, light green or pink in color covered with short, stiff and slightly rough hair. They have thorns pointing downwards. The leaves of this herb are egg shaped and green in color. The flowers are small and face downwards. You will always find old flowers at the bottom and fresh ones at the top.

As already mentioned, these herbs helping in relieving acidity, their seed are very useful in facilitating easy and painless delivery. The seed are grinded and mixed in water to make a fine paste which is applied in the navel, pubis and vulva for a safe delivery.

Rough chaff is one of the most important herbs also used by villagers in preparing mixed greens. Their leaves are tasteless but they have a bitter taste after cooking which is slightly mild in nature. Their leaves have soft cellulose, too.

Achyranthes aspera contains triterpenoid saponins which possess oleanolic acid as the aglycone. Ecdysterone, an insect moultinghormone, and long chain alcohols are also found in this herb.

This herb proves to be an effective relieve against several ailments, some of these are:

Though it is mentioned that rough chaff seeds facilitates easy pregnancy, it is advisable to take the juice in small doses. Always use this herb after consulting a practicing practitioner.

Though Planet Ayurveda does not use this herb in any of its product, but it has other herbal product range which can relieve ailments that can be relieved by Achyranthes aspera:

It is a constant endeavor at planet Ayurveda to produce quality products with best quality herbs. We believe in producing natural, organic ingredients especially for our products. All our remedies have vegetarian ingredients. So we recommend our clients to use our products without any worry and live a healthy and quality life.