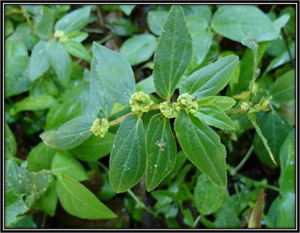 The common name for Euphoria Hirta is Snakeweed. In Hindi it is known with the name Dudhi and the Sanskrit name is Dugadhika. It is a popular folklore medicine for relieving dengue in Philippines. The plant has the reputation of increasing flow of milk in lactating women. Other women related disorders and respiratory tract disorders are relieved with this plant. This plant is indigenous to India and is found on wastelands and roadsides.

Whole plant is used as a medicinal supplement.

It is an erect, small, ascending, annual plant which reaches a height of 50 cm. The stem is hairy and the leaves are oblong, elliptical. Flowers are small, crowded and numerous seen together in thick cymes about 1cm in diameter. The fruits are yellow in colour, three celled, hairy and have keeled capsules which are around 1-2 mm in diameter. They contain three four sided, brown, wrinkled and angular seeds.

This plant is known for its benefits in relieving female disorders. Other ailments like cough, coryza, respiratory ailments, asthma and bronchitis are also relieved with the help of Euphorbia Hirta. In India is has been used for relieving worm infestations usually seen in children, jaundice, gonorrhea, pimples, tumors and digestive problems.

It comprises of triterpenes, phytosterols, alkanes, polyphenols, tannins and flavonoids.

SAFETY PRECAUTIONS AND SIDE EFFECTS IN USING EUPHORBIA HIRTA

Euphorbia Hirta should never be used during pregnancy. Over dosage will lead to complications. This herb should be used only under the guidance of an authorized practitioner.

Currently there are no Planet Ayurveda Products that use this herb as an ingredient in them; however the below mentioned Planet Ayurveda products are useful in some conditions for which Euphorbia Hirta is used: